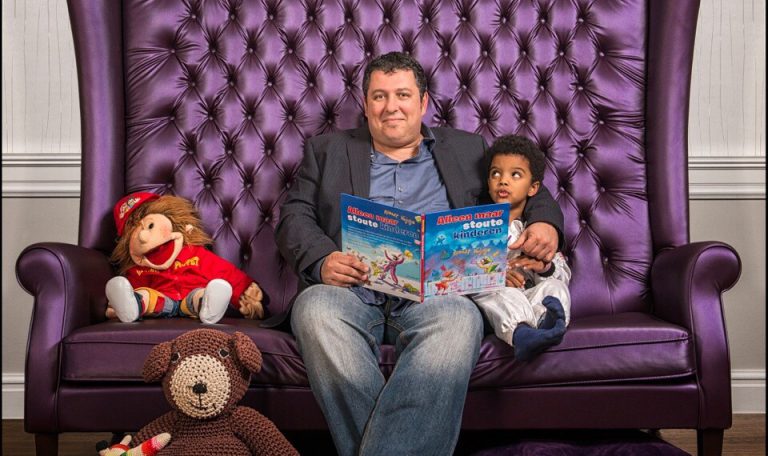 On Saturday, my youngest son and I watched Sinterklaas arriving in the Netherlands, this time on TV. It was a different experience from waiting excitedly for Sinterklaas in the parade in

Amstelveen and catching sweets tossed by the Black Petes. When I watched the parade in the past, I felt uncomfortable with the Petes, they looked like a slave caricature. As a relative newcomer in the Netherlands, I thought I might not fully understand the heated discussion about Black Pete that has been going on for the past few years. To gain a better understanding of the issue, I called the renowned Dutch Jewish author, Robert Vuisje. He  has published several books on the Dutch multicultural society, has expressed his opinion on  Black Pete, and wrote a children’s book about him.

Do you celebrate Sinterklaas?

״I have been celebrating Sinterklaas my whole life. Although he is dressed as a bishop, he is a part of a Dutch tradition that everybody can celebrate. In our family, My father and I are professional writers and so are my father’s brothers so the poems we write to go with the gifts on December 5th are always sophisticated. They are a way of telling someone what you think about them in the last year in a playful and fun way.  The holiday is not just for children, grown-ups also write poems and receive gifts. Sometimes we tease someone all year about something they did that it is going to be in a poem.״

״Pete is Sinterklaas’s servant. When I was growing up in the 70s and 80s he had black face makeup, a curly black wig, red lipstick, and a gold earring. He spoke in a Surinamese accent and acted

silly. As a child, I didn’t notice the accent or associate Black Pete with Black people. ״

What is the problem with Pete?

״There are approximately half a million to a million people living here today whose ancestors were slaves the Dutch brought from Africa to work in their colonies such as Suriname and the Dutch Antilles. They are a minority with a painful history. Hundreds of years later, they still feel hurt when seeing black face makeup and people dressed up as Black Pete, Sinterklaas’ servant, arriving with him on a ship. My wife is one of those people. She is a Dutch/ Surinamese descendant of the slaves. She usually doesn’t speak about racism and when we first talked about it, she said, that as a child, she always felt uncomfortable when Black Petes came into the classroom. They acted silly, spoke like her parents and were the servants of an old white man. She felt like they were laughing at her. I grew up in Amsterdam South and there was only one Black boy in my class, he sat next to me for years. After talking to my wife, I called and asked him how he experienced Sinterklaas and Black Pete as a child. He felt the same as my wife did. Then I realized I had sat next to him for years, without knowing we had such different experiences, without knowing he had such a negative one.

The Black Pete discussion is not about the White Dutch experience of the holiday, nor is it about me. I am not the one being mocked. It is about people who feel ridiculed for a few weeks in November and December every year, and their feelings are ignored.

The Black Pete discussion is not about the entire holiday but about a single detail that can be changed without detracting from the holiday. This Detail should be updated, it isn’t in keeping with modern times.

If the purpose of coloring his face is that the children will not recognise him, Pete can hide behind a different color, one that does not have a painful historical association. One that will enable everyone living here to enjoy the holiday.

What seemed to me as a small annotation to the holiday turned into a cultural war with people passionately defending their right to black face makeup and saying it is their country and they can’t be told what to do here. It is a childish issue that turned into an adult dispute. A discussion about who owns the country’s past. To me, it is a metaphor on the recent discussion, about children of foreign descent who were born here. Who are officially Dutch and still treated as foreigners without the right to express their opinions.״

One of the reasons I contacted Robert was that, a few years ago, he wrote a children's book titled ‘Alleen maar stoute kinderen’ in which the children dress up as Petes and paint their faces in various colors and dots – Green, Blue, Red, and Yellow.

״I usually write adult books, this is one of the first invitations for an interview about a children’s book. But it is an adult issue.״

Why colorful Petes and not a smudge faced Pete?

״Soot-faced Petes could be a compromise, but colorful Petes are a real step away from the black color. I think we should leave the black behind, the children won’t care.

Some people insist on soot-faced Petes because in the story they go down the chimney. It’s all made up, so what’s the difference? Most houses don’t have chimneys nowadays and even if they do, no one believes a grown man can slide down the chimney with a huge bag of gifts. The whole story is fiction, so what’s wrong with changing Pete’s color? ״

How did you come up with the idea of colorful Petes?

״I thought it would be fun. It’s a children’s holiday and if children color each other's faces at this time of the year it can be fun and not be associated with black.״

Do you feel the Dutch people are inclined to stereotypes and racism?

״I was born in the Netherlands, twenty-five years after World War 2 ended. My mother is American and my father is from a Dutch Jewish family that was here in the Holocaust and some of them did not return. It is not a story from the history books for me. My family told me about hiding and fleeing from one hiding place to another. They told me that the Dutch population and authorities helped the Nazis find Jews. I grew up in a country where the government cooperated with the Nazis and not many people opposed them. I always thought about how we were treated differently, 80% of the Dutch Jews were murdered in the war and the feeling that it can happen did not disappear.

Black Pete and slavery, another violent, brutal story. I feel it is part of the culture here, to regard some people differently. The discussion about Black Pete is about who is the boss, who gets to shape the culture here. You can’t tell a family living here for a few generations, “this is our country, this is how it’s done here, you are only guests”. Slavery might sound like ancient history, and some people ask why you are still talking about it. But it is an important and painful part of our history.

The fact that there has been a discussion about Black Pete for the past few years is an improvement. When it began, many people refused to even consider changing Black Pete. Most people were unaware of how others felt about the whole issue. Most of the Dutch people don’t live in large cities but in small towns, where almost everyone is white and they have never heard about any problem with Black Pete. They were surprised that people who live here feel this way. Especially in the last six months, everybody is now aware of the negative feelings about Black Pete. There is awareness and there are discussions. That is an improvement.״

One last question,  which books would you recommend to help Israelis living here understand the feelings of Dutch Jews and other minorities?

״My book, ‘Salomons oordeel’, was published in 2019 and deals with these issues (It is a sequel to his successful book ‘Alleen maar nette mensen’, which was also filmed).

Another interesting book is ‘Wees onzichtbaar’, by Murat Isik, which tells the story of a Turkish immigrant who grew up in Bijlmer. He was the only Turkish boy in a black class and experienced discrimination. Cynthia Mcloed wrote a few books about slavery in Suriname. One of them is ‘Hoe duur was de suiker’ (which was filmed as well).״ 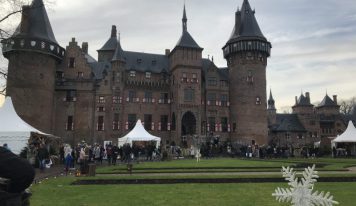 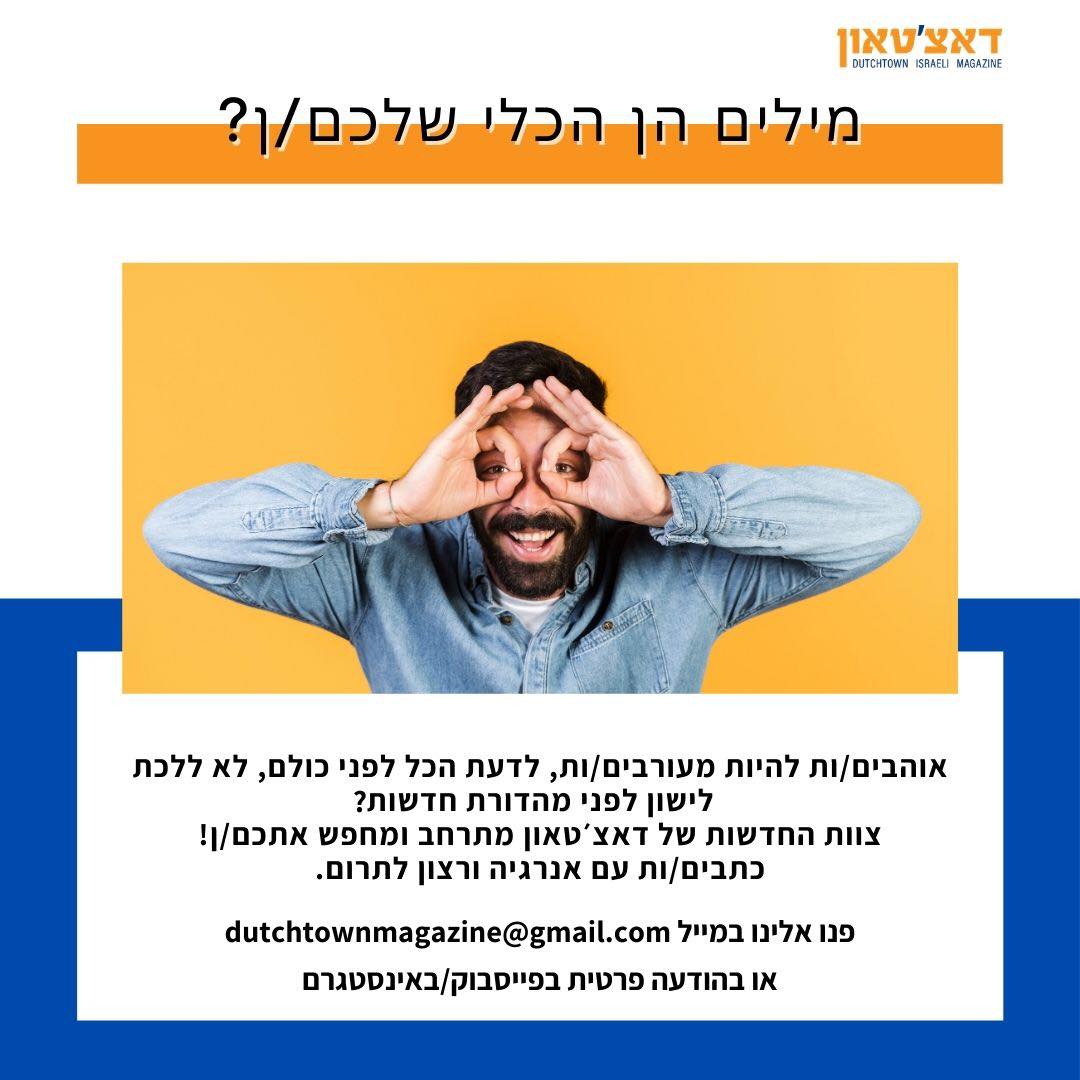